Guido Ristorante in Pollenzo, just outside of Turin

Posted on October 9, 2010 by Rachel Steckler 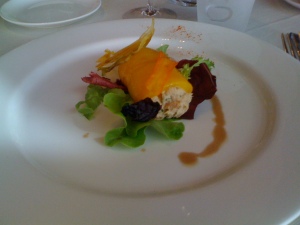 I’ve lived in Turin a little over a year and only recently discovered a cooking school very close to my apartment in Piazza Vittorio. The cooking school, il melograno, is Italian for pomegranate.

The cooking school is run by Romana Bosco. I checked online and discovered that they were organizing a tour to go to Guido Ristorante in Pollenzo on the campus of Slow Food University. Piero and Ugo Alciati operate this restaurant in memory of their mother Lidia Alciati who is known as the queen of Piedmont’s cuisine. 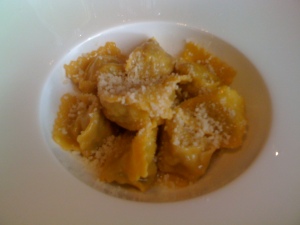 On the bus ride over to Pollenzo I had the pleasure of meeting some wonderful women from Turin. Prior to having lunch, a group of us decided to walk the grounds. The day was simply gorgeous and with winter quickly approaching, I take advantage of every minute I can to enjoy some sunshine. In fact, we all enjoyed our walk so much around the campus we lost track of time and got separated from the rest of the group. 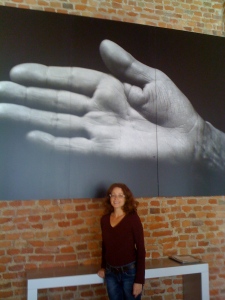 Upon entering Guido Ristorante, one sees a black and white portrait of the hand of Lidia Alciati. It is strikingly beautiful and a true sentiment of her dedication to the fine art of Piedmont’s cuisine.

We enjoyed a five-course meal along with a wine pairing but the two stellar dishes were the pasta course and the dessert.

The third-course consisted of agnolotti, (an-yoh-loht-ti) a traditional pasta dish from Piedmont. The recipe to make the pasta for the agnolotti consists of twice as much egg yolk as would be for a typical pasta recipe, two egg yolks for every 100 grams of flour, making the pasta dough very refined and delicate. In fact, I listened in on a conversation across the table from me where the women were discussing the method of preparing the pasta. Because it is such a rich and very delicate pasta dough, it isn’t worked in the same manner as a traditional pasta recipe. Because the dough is worked very little they were explaining how the gluten doesn’t have a chance to form. The stuffing inside the pasta consists of vegetables, pork, rabbit, veal, eggs, and Parmesan cheese. This hearty dish is served with a light sauce made from a brown roux and meat stock. But this dish would not have been complete without a big red wine from Isabella della Croce 2008, Barbera D’Asti.

The fifth-course was the dessert course and it was my absolute favorite! We were served a semifreddo allo zenzero con couscous, or a ginger semifreddo garnished with couscous cooked in spices such as turmeric, ginger root and black pepper. Hidden underneath the luscious semifreddo was a crumble of amaretti, an Italian cookie that is traditionally made in Piedmont. By the way, there are two types of amaretti, or almond cookies: crispy and chewy. In this dessert, the crispy version was appropriately used. The couscous delicately garnished the semifreddo along with an accent of candied-dried fruit. The flavors and textures melded so well together.
Guido Ristorante: http://www.guidoristorante.it/ 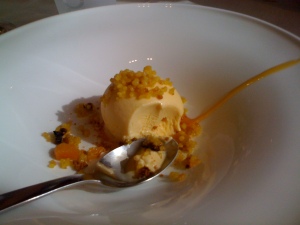 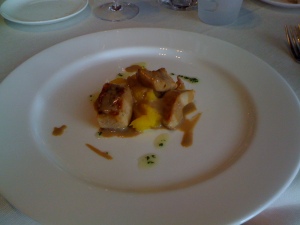