Finale Ligure, for some memorable eats!

Living in the region of Piedmont, one has the luxury of living beside beautiful snow-capped mountains and at the same time one is relatively close to the Italian Riviera in the region of Liguria. Having been born and raised in North Miami Beach, I spent practically most of my summers at the pool and the beach with friends and family. It goes without saying that yes, I do miss the lovely, sandy white beaches and the turquoise water off the coast of Miami. However, the region of Liguria is within a few hours drive away from Turin. So within a couple of hours I can be right at the beach. But, I would recommend arriving early (no later than 9 am) so one can beat the crowds and find a parking space.

A recent excursion led me to Finale Ligure (Fee-na-le Lee-gu-reh) where I found some good eats just a few passes away from the beach at Trattoria Cercavo Giobatta and the beautiful medieval village Finalborgo.

On Sunday afternoons most Ligurian restaurants close relatively early for lunch, around 2 pm. In fact, we discovered that the restaurant which we were intending to eat at wasn’t taking any more lunch customers. So, we walked along the streets and found a lovely trattoria where we were welcomed to take a seat. It just so happens that this trattoria is a labor of love for a husband and wife team from Milan. The husband works the front of the house and his wife is the chef.

We noticed right away that their menu had a bit of creativity to it and their primo piatto: Lasagne Branzino e Carciofi (first dish: lasagna with Mediterranean fish and artichokes) was one of my favorites! For the second dish: fresh potato crisps, taggiasca olives, cherry tomatoes and pine nuts spectacularly accompanied the grilled branzino. Once again, this was a testament to how simple, fresh and local ingredients create a stellar meal. A nice white wine pairing for our meal was made from Pigato, a local grape. White wines from Liguria tend to be young and full of flavor. For dessert we shared a slice of their creamy, rich apple crumble cake or torta alla mela con crema.

To round out our meal, we decided to take a caffè at Giovannacci Caffè (Via Rossi Emanuele 26). Everywhere you looked you could find plenty of reasons to bring a little something back home with you (candies, chocolates and pre-wrapped gifts). We enjoyed the caffè so much, we came back for a second taking just before our drive back to Turin.

From there we took a short car ride to the beautiful medieval village, Finalborgo. The village dates back to the 12th century and its narrow alleyways, porticos and stone-bridges charmed the romantic in me. 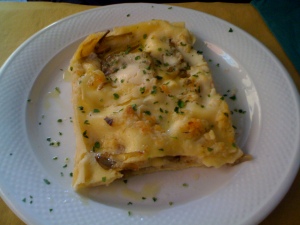 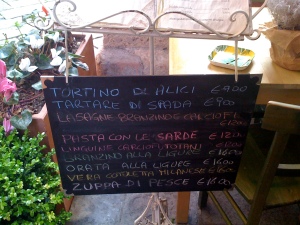 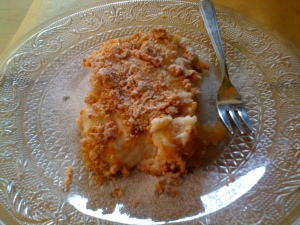 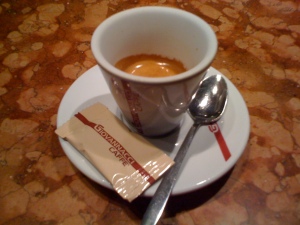 6 Responses to Finale Ligure, for some memorable eats!